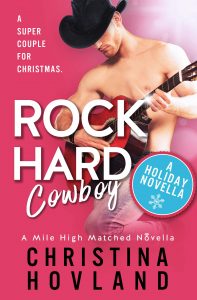 **READ FOR FREE IN KINDLE UNLIMITED**

A supercouple for Christmas.

Rock ‘n’ roll cowboy Tucker McKay’s muse has left the building. Returning to his roots at his Colorado ranch might be the inspiration he needs, and he’s done everything he can to ensure his reputation shines for his eventual return to the public eye, should his muse show up again. Ready to leave town, he’s not prepared for the paparazzi frenzy after a starlet falls face down on his lap at L.A.’s trendiest new night club.

America’s Sweetheart, Mackenzie Bennett’s career is on the rocks after a few lackluster movies damaged her studio appeal. She needs something to change, and fast. What she does not need is the firestorm that ensues after an ill-fated spill is caught on camera. Spending Christmas in Colorado with the man she publicly embarrassed is her only option to turn around the bad press.

While a fake relationship might drum up the publicity needed to save both of their careers, a small-town family Christmas may be just what they both need to figure out what truly matters…